Where does Valentines Day Come From ?

Where it is coming from our Valentines Day?

Everywhere people celebrate Valentines Day, but not many know where it is coming from. It is a day to remember Love especially for lovers, but also for couples and friends. It is basically a beautiful thought, even these days it seems to be more commercial.

Here the story of Valentine.

Valentine lived in the third century AD in Terni, Italy. According to the legend, Valentines day goes back to this Italian Bishop Saint Valentine. It is told that he secretly and against an existing prohibition married lovers, even it hey were slaves or soldiers. He married these lovers in Christian tradition which was breaking the prohibition of the Roman emperor.
In that time, couples were not allowed to get married in a church because Christianity was banned as a religion. It is said that he liked to give and had a garden where he grew vegetables and flowers.
He did give flowers from his garden to the newly married couples and blessed them so that the marriages, so was said, have been under a lucky star.
Valentin’s was not lucky and he was beheaded on February 14 in the year 269 by order of the Roman emperor because of his Christian faith. But Valentin’s death was on the same day of the ancient Roman festival Lupercalia.
Lupercalia was that time”The Feast of the Wolf”, the festival of the Roman Goddess Lupa (the female Wolf). She was worshiped in the form of the goddess Juno Februata, the Goddess of “Love Fever”. On this day, flowers were sacrificed and couples apparently connected by “love lottery” for one year. Girls went to the temple, to consult the love oracle.
Young men draw from the lottery an unmarried girls name. The drawn couples walked along the river Tiber and many of them became lovers. About 100 years after his death, Valentine was canonized. In the Middle Ages, 496 AD, 200 years later, Pope Gelasius declared February 14 the existing holidays and customs to the Christian faith, and now called it the day of lovers “Valentine’s Day”. The old tradition was continued under a new label it was the same day as the “heathen” celebration.

An important place has the Valentine’s Day in English-speaking countries. more than 600 years ago, in England, “Valentine” cards with little love poems were given and it was the fashion to send cards along with flowers. The writer Samuel Pepys wrote a love letter on 02.14.1667 to his wife. From then on, the tradition of sending letter and flowers started in the prestigious British society.
The poet Chaucer found his poem “The Parliament of Birds” on the occasion of St. Valentine’s Day celebration at the court of King Richard II in 1383 he performed it for the first time.He brings the pairing of the birds in context; because it was Valentine’s Day, on which the birds were married.

In West Slavic and East German areas Valentine’s Day and the feast of the so-called “Bird Wedding”, was celebrated, there is also a German folk song, wich I often sing with my Grandkids.Whenever we have a long drive or work in the garden in spring, we sing the “Bird Wedding” song and even included birds from here and made little poems.
Since ancient times”birds” are a symbol of love and sex, of ease, freedom and enthusiasm. 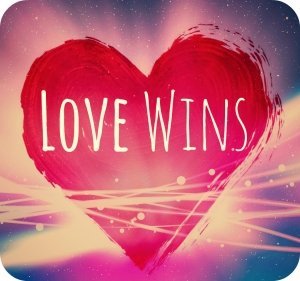 Beyond commercialism, Valentine’s Day reminds us of the desire of love and pleasure. The most important here is that we can see that after thousands of years, the action of love by a human being still is being remembered.Valentine did not care about rules, race, status and did give love no matter if a slave or rich man.
This shows Love always wins, love and kindness always will be remembered.

“In the flush of love’s light, we dare be brave. And suddenly we see that love costs all we are, and will ever be. Yet it is only love which sets us free.”Maya Angelou

Only your compassion and your loving kindness are invincible and without limit. — Thich Nhat Hanh

I hope you liked this legend about Valentines Day

I think it is true what Gandhi said: “Truth and Love Always Win. When I despair, I remember that all through history the way of truth and love have always won. There have been tyrants and murderers, and for a time, they can seem invincible, but in the end, they always fall. Think of it–always.”Mahatma Gandhi

What are your thoughts? Do you believe Love always wins and will be remembered?