A Donkey Story – What Can We Learn From The Wisdom Of A Donkey?

What can we learn from a wise Donkey?

A wise Donkey, you may ask?

Most people think Donkeys are stupid and stubborn and underestimate them. But this is far from reality. The long-eared animals are intelligent and attentive.

Although their movements are slow and they never seem to be in a hurry, they show intelligence and can solve even complex problems when given the opportunity.

They also have an excellent memory that allows them to remember places and paths they have traveled long ago.

In many regions of the world, Donkeys are still used as pack animals. They endure extreme living conditions and do work that would be impossible for others.

They have a reputation for being very stubborn; when donkeys don’t want to do something, it’s tough to convince them to do it. However, these are very cautious animals that can sense danger and therefore do not obey.

Donkeys rarely react headlessly. On the contrary, they are mindful and carefully observe a situation before moving on.

The Story of the Donkey that fell into the well 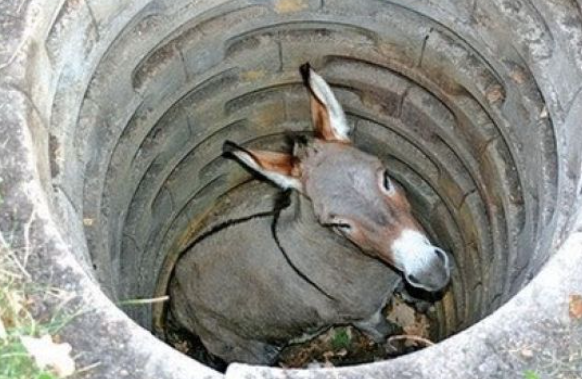 One day a farmer’s Donkey fell down into a well

The animal had served the farmer for many years; now, it was old, a bit weak but loyal to its master.
The Donkey screamed pitifully, lying in the cistern, and the farmer wondered what to do next. He tried to pull the animal out of the old pit with ropes, but the rotten structure with the wooden reel collapsed under the Donkey’s weight.
Eventually, the farmer decided that the old Donkey was not worth the effort and help of a neighbor to retrieve. He had probably broken his legs in the fall and was no longer of any use anyway. He had not used the cistern for long and wanted to fill it with the soil he had already carted in.

Finally, with a heavy heart, the farmer decided to let the Donkey die.
So the farmer got a shovel and began to shovel the earth into the well.
The Donkey quickly recognized the farmer’s intention and began to scream heartrendingly. But the farmer’s heart wouldn’t be softened, and he just kept digging without looking over the edge of the well again.
The Donkey also seemed to have come to terms with his fate because, after a short whimper, he heard nothing more from him.

After some time and effort, the farmer carefully looked over the cistern rim to see if the Donkey was buried. He was amazed because the Donkey had done something extraordinary. The Donkey was still alive, standing on all four legs but much higher up than before. The clever animal had shaken off every shovelful of dirt that landed on his fur, trampled it, and slowly got higher and higher that way.
The farmer immediately realized his mistake and felt sorry for the Donkey. He continued digging, and the bottom of the well was soon high enough for the wise Donkey to jump out of the hole under its own power and trot away. 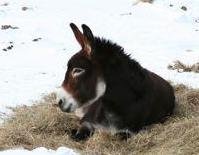 What can we learn from this story?

Like all life, we are in a constant process of evolution. As human beings, we have the opportunity to develop and grow internally. If we refuse or slow down, it can lead to unpleasant states and situations. Therefore, we all stand like a donkey in a well, and life urges us to step up. Sometimes we even make a leap in development.

The difficulties, problems, and fears we face are like the dirt falling on the Donkey’s back.

The Donkey has the choice to submit to its fate or shrug off the burden, lift his hooves, and trample the dirt.

In the same way, we can see our problems as obstacles; or see them as an opportunity to grow and have a more liberated perspective on life.

How can you grow through your problems?

Admitting one’s difficulty is like the yelling of the Donkey.

When our Donkey falls into the well, he is shocked and screams. It is an understandable reflex that mobilizes the forces of survival. And then, he realizes that the farmer wants to bury him.

First, we must recognize that something is difficult for us. As long as we think our misery is due to the behavior of others, we are stuck in the blame game and therefore do not see what is wrong with ourselves and our thinking.

However, some people immediately blame and devalue themselves, which does not lead to a desirable situation either. Giving resentment space for a while can be helpful and sometimes necessary.

How can we resent the life we’ve created for ourselves? Who’s to blame, who’s to credit, but us? Who can change it, any time we wish, but us? – Richard Bach 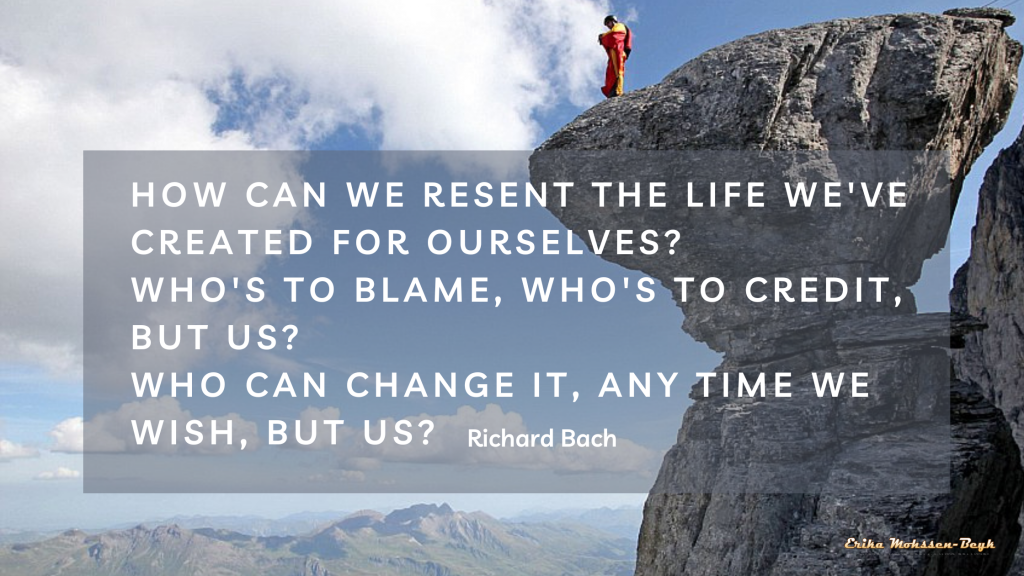 A conversation with people you trust or writing down your emotional experience can be beneficial.

But do not waste too much time and energy and give other people or circumstances power over you. It is about admitting your difficulty or weakness if you want to get out of the well like the Donkey.

Ask yourself: What does the situation trigger in me?

It’s about feeling what the dirt is doing to you and how you deal with it. Begin to take responsibility for the problem.

When the Donkey realizes that the farmer wants to bury him, he gets quiet. He observes his situation, and his instinct may tell him what to do.

He starts to shake off the dirt.

If you contemplate a stressful situation and admit that you are part of the problem, you can distance yourself from it.

Ask: What am I doing to make the situation complicated?

By observing the situation, you can change your perspective.

Becoming quiet and able to distance yourself enables you to listen to your heart and intuition. Despite fears, you will feel and do what is right.

Whoever is practicing mindfulness and meditation will benefit from it in such difficult situations.

“Those who are silent, self-effacing, and attentive become the recipients of confidences.” — Thornton Wilder. 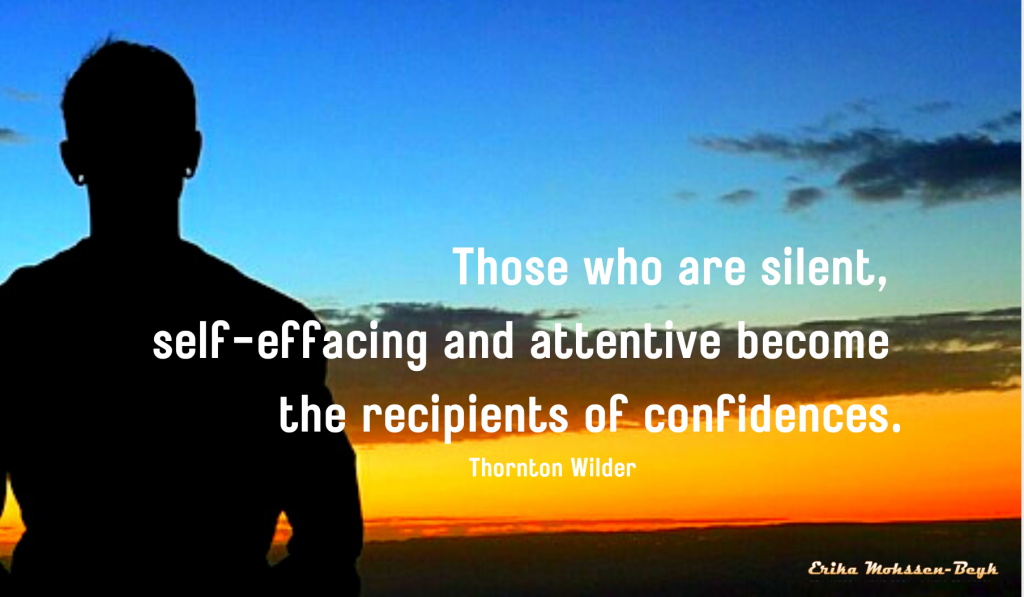 The Donkey starts to trample the dirt; he finds a way that is a solution to his misery.

We can detach ourselves from our point of view, let go, and open ourselves to a broader perspective. We can always find the correct answer for us in every situation.

You can learn and grow from situations by finding the right attitude and behavior that is the most useful and appropriate to the problem for you and those involved.

Ask yourself: Which attitude would help me in this situation? Are there positive aspects and perspectives?

You can use your problems and see them as development as a meaningful and growth-oriented life opportunity.

Having an attitude that can be both meaningful and useful is the assumption that whatever problems we encounter in life are learning challenges for us. They can help us give up our inner limitations and learn new ways of acting and possibilities in life.

When You Really Pay Attention, Everything is Your Teacher – Ezra Badya

Our wise Donkey knows now that if he stamps on the dirt, he is no longer a victim. Now, he knows what to do, uses his energy for something practical, and steps up confidently.

Now we can implement the learning steps and take concrete action.

A positive effect gives us new courage and strength to take further steps in the right direction. We can confidently learn and grow in small steps.

Ask yourself: What or who can help me to take the next step? Have I dealt with similar situations positively in the past? How did I cope with them?

Take the most effortless first action steps to move in the right direction. Make the learning steps manageable and fun, if possible. Do not overwhelm yourself, and keep going.

The leap out of the well

When the wise Donkey had reached enough height, he happily jumped out of the well. Most likely, he will now look for the most aromatic herbs and grass and enjoys freedom. And the parable ends.

We also hopefully can leap in development at this point. Having a new perspective, new goals, and new learning tasks can begin. We often underestimate ourselves, but we can realize our infinite potential in difficult situations.

Good if more humans had the attitude of the Donkey. Keep calm and mindful in any situation and when things get chaotic. Persevere, even under stress, and don’t throw the towel if they can’t get any further.

Learn from the wise Donkey and how he managed to get out of the well by being mindful and attentive. There is always a way out. Never give up!

Read: “The Wisdom of Donkeys: Finding Tranquillity in a Chaotic World” and more.

If you like Stories that inspire, read > Balloon Man – Story that will inspire you

See also How You Can Improve Your Life if You Change Your Thinking.

and Ways That Help To Step Out Of Your Comfort Zone